When you ask people why they chose a Nissan LEAF as their vehicle, you get varied responses: “Because it saves me money”, “Because it’s so comfortable and easy to drive”, “Because I like technology”, “Because I want to do my bit to reduce emissions”…

It would be very rare that someone stated that it’s because they thought it was the best looking vehicle they have ever seen. Let’s be honest, it’s “distinctive”. The bug-eyed headlights (intended to direct airflow around the wing mirrors and reduce internal wind noise), and the rounded bumpers meant that “form follows function” was very much at the forefront of the designers back in 2010 when the LEAF first launched.

So it was with much anticipation that I tuned into the live YouTube unveiling of the new 2018 Nissan LEAF at 1.30am on Wednesday morning. Obviously, we had seen quite a few teasers of the new car in the run up to the event, so the overall design wasn’t a complete shock, however it was always going to be a “fingers-crossed” does-the-Tinder-profile-pic-match-the-date-in-real-life moment to confirm that Nissan hadn’t been hiding anything untoward beneath the camouflaged vinyl wrapper. 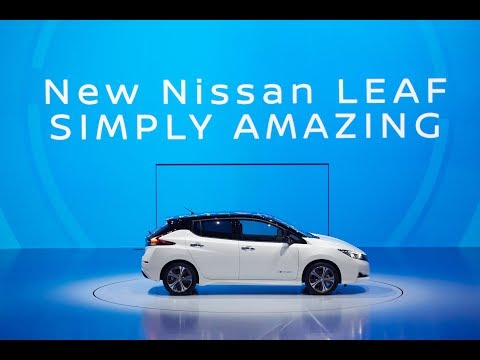 Thankfully, when the fancy lightshow concluded, and the LEAF was thrust upon the stage, it was a pleasant surprise. The new LEAF has a more modern, cohesive and brand-centric face. The new front and rear bumpers, together with lower sideskirts and a “floating” roof effect make the LEAF seem more grown-up and streetwise.​

The new features which have been bundled into the new LEAF – ProPILOT, ProPILOT Park, e-Pedal, together with new standard safety kit and tech like Android Auto and Apple CarPlay, mean that the LEAF has been brought right up to the bleeding edge of automotive technology, and can hold it’s own against premium marques.

The new e-Powertrain has been completely redesigned – utilising a new 110kW motor (up from 80kW in the previous model), and a 40kWh battery pack (up from 30kWh in the outgoing LEAF). This means that acceleration and performance has been improved considerably (0-60 now takes 8 seconds versus the 11.5 seconds previously); and range has extended up to 235 miles (on NEDC cycle).

For Europe, the LEAF will now come as standard with 6.6kW onboard charging, and a new Type 2 connection to harmonise with European standards for new EVs. ChaDeMo Rapid 50kW DC charging has been maintained, allowing 40 minutes to recharge from 0-80% on longer journeys.

The Nissan LEAF has outsold it’s nearest EV competitor by 2-to-1 in the UK during 2017, which is remarkable for a model which was 7 years old and at the run-out stage of its life-cycle. I’m sure that the new revisions and facelift will allow Nissan to continue that trend through 2018.

Deliveries are expected to start in January 2018 in the UK, with pre-orders opening in October. So watch this space for more information and pricing as soon as it gets released.

Back to Blog Home