An SUV designed around you.

One of the most exciting SUV’s on the market, the Kia Sportage, is a vehicle designed for more than just exceptional space, performance, looks & practicality – it’s an SUV designed to be lived with, to become part of the family, a reliable companion to take you wherever you need to go.

What's in it for you?

When you buy a Kia Sportage SUV, you’re not just buying into the SUV market, you’re buying into a lifestyle.

As mentioned previously, this is an SUV designed for more than just space, performance, looks & practicality – but what comes in these four areas in the Sportage?

Space – The Kia Sportage comes equipped with storage and luggage space in every nook & cranny. In the back, the boot has a 491L capacity with the seats up, which then extends to a staggering 1,480L when the rear seats are folded down, meaning room for those extra bags for your big shopping spree or your family vacation away to the countryside – Kia Sportage has you covered.

Performance – The engine variant you choose is entirely up to you, and you have quite the selection with the entry engine being a 1.6L Petrol 2WD spec, pushing out 130 bhp, 0 – 60 mph in 11.1 seconds or you go can go to the all-new engine, a hybrid combination of diesel and electricity with the 1.6 CRDi ISG 48V 2WD & AWD variants which give you the best of both worlds, producing 134 bhp, 0 – 62 mph in 11.4 seconds, combined mpg ranging between 48 – 52 and emissions from 141 g/km, which are significantly lower than the other models, you get to do your bit for the planet without sacrificing on performance. We’ll not bore you with every engine spec, you can view the different engines available within the Technical Spec tab down below.

Looks – The Kia Sportage has come a long way since the early models. Now, in the present, the Kia Sportage range all come with a gorgeous new body styling which isn’t just pleasing to look at, but strangely feels great to touch… with sharp curves, soft body lines and an overall aggressive, but not too aggressive stance which looks great for any angle.

Check the below models of the Kia Sportage to see the top features across the range. 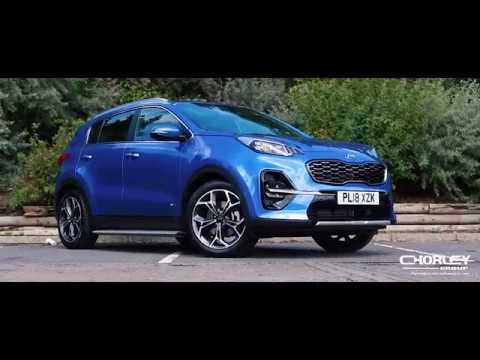 The Kia Sportage comes in five different models. The Sportage '2' '3', 'GT-Line', 'JBL Black Edition' & 'GT-Line S' with each having their own benefit to offer you. Look down below to see what the different models have to be proud of.

What payment options are available?

It's never been easier to finance a Kia with Chorley Group. All vehicles can be purchased outright at our current Cash Price offer, however an overwhelming majority opt to finance new cars with a finance agreement, paying monthly for the vehicle over an agreed period. These finance agreements come in a variety of flavours to suit your personal requirements.

The next steps towards your Kia Sportage

Step one | Find your car

Explore our range of New Kia vehicles online, if you find a vehicle you like you can contact us in a variety of ways. Either through our LiveChat, Online Enquiry Form, Social Media (Facebook, Twitter, Instagram etc), phone or just visit your local Chorley Group.

If you already own an older vehicle and plan to upgrade to one of our newer cars, you can trade and use it toward the cost of your new car. How much is your car worth? We offer a free online Valuation Tool which allows you to get a rough estimate value your car might be worth.​

get a valuation on your car​

All our new cars are available to buy outright, however the majority of customers will take out one of various finance deals and spread the costs of the car over series of monthly payments. Finance offers allow you to select your own annual mileage, grade preference, colour and terms.​

7 years, at no extra cost. This means 2,555 days or 100,000 miles of trouble-free motoring and a lower cost of maintenance. This peace-of-mind provided by the 7-year warranty makes it a lot easier to own a car. What’s more, the car warranty is transferable to future owners, maintaining your vehicle’s value and making it highly attractive for reselling.

You can find out what is & what isn't covered in Kia's 7-year warranty, and view the whole T&C's here.

The Sportage comes with 3 different engine specifications, see which one is right for you before you buy (based on 17" wheel '2' grade)

Add extra features to your Kia Sportage to make it even more beautiful;

Don't forget to add some extra touches inside of your Kia Sportage;

More than meets the eye.

Now, what specification of Sportage you decide to go with is up to you, but as you climb the ladder and reach the top specification, which is the GT-Line S, you will find benefits of each model along the way and what they ca do for you. Some of the features you will find across the range are;

We’ll not go on about the specs, the above is only a small taste of what the Kia Sportage range has to offer you. If you would like to know more, go ahead and download your free brochure located below and explore all the possibilities awaiting you in the Kia Sportage.

If you would like to arrange your free test drive on the Kia Picanto, view one on person, or even download a brochure, use the three buttons below to guide you on your next steps towards owning a Kia Picanto.

Take a closer look by using our interior and exterior tours

Left Right
Back to Top